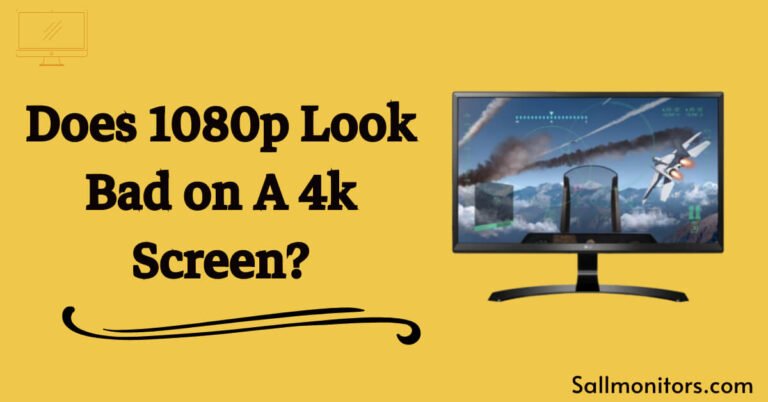 There is too much to discuss on this topic. If you’re not sure whether to get a 1080p or 4K TV, you may study more about both before making your decision. What about video games, for example? Without further ado, let’s delve deeper into this subject.

The distinction between 1080p and 4K is undeniable: a 4K screen can display four times the number of pixels as a 1080p screen. It’s nearly hard to notice the difference in quality between a 1080p and a 4K screen from a distance.

Users can notice the difference while watching movies in Blu-ray or another high-definition format. In that instance, 1080p will look far better on a 4K TV than on a monitor with the native resolution. Videos on the Internet, on the other hand, appear to look relatively identical on both 4K and 1080p TVs.

Getting a 4K TV is a fantastic choice if you already have some 4K material or believe that it will become more available in the future. However, if you believe that 4K is significantly superior to 1080p, you may be startled to learn that most people do not detect a significant improvement in quality. This is due to the fact that 1080p is already quite crisp.

As a result, the transition from 360p to 1080p will be different. On that note, non-Full HD video (i.e., anything below 1080p) will look better on a 1080p TV than on a 4K one. This is due to the nature of upscaling once again. There’s not much a 4K TV can do to improve the content that doesn’t have a lot of detail, to begin with.

1080p Blu-ray upconverted to 4K screens looks nice but not significantly better than 1080p on a 1080p TV. In practice, 4K content streamed from Netflix or Amazon can look worse than 1080p Blu-ray.

If you’re still undecided, here are some pointers and reasons to favour one over the other. For starters, 4K televisions are more modern technology, and 4K material continues to grow on the Internet. In addition, 4K TVs feature four times the number of pixels as 1080p TVs. On 4K TVs, the image is substantially sharper, especially when the content is also in 4K.

Colours can also look considerably better on 4K TVs because of those pixels. In larger TVs, the difference between 4K and 1080p is very noticeable. A 72-inch 4K TV, for example, looks far superior to a 72-inch 1080p TV. The difference is incomparable because 1080p at that resolution looks terrible. Individual pixels are visible even at a distance.

Okay, now that we know why 4K TVs are so great, when should you go for a 1080p TV? If you use TV occasionally once in a while, a 1080p TV is a way to go because they’re substantially less expensive. Furthermore, inexpensive 4K TVs do not look nice, and you can save money by purchasing a better-looking 1080p TV from a renowned manufacturer.

When it comes to size, a 4K TV makes little sense if you’re buying a little TV, such as a 32-inch model. With that size, you won’t notice much of a difference. Also, if you just watch the 1080p video, there isn’t much motivation to upgrade to 4K. On a 4K TV, 1080p does not look horrible, but it also does not appear any better.

So, does 1080p on a 4K TV seem bad? 1080p content will frequently seem better on a 4K TV than it would on a 1080p TV, thanks to upscaling technologies. This is especially true for content that contains a lot of information and is presented in a high-resolution format, such as a Blu-ray film. Videos, on the other hand, do not appear to be much better in 4K compared to 1080p. Games can look a lot better or a lot worse, depending on the platform you’re using.