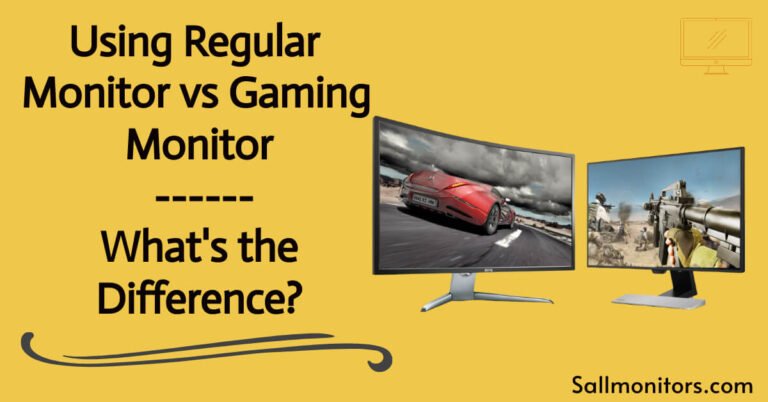 Certain aspects of the gaming business do not truly assist you in becoming a better gamer. A lot of headsets have RGB lighting. Gaming chairs strive to seem really expensive and professional. What about gaming displays, though? This is a question that the community frequently asks.

Does this suggest that high-quality gaming displays are the route to being more? Or are gaming monitors just another example of anything that costs more just because it’s classified as “gaming?”

When it comes to console gaming, the argument over whether to use a TV or a monitor has raged on for years. On the surface, the decision looked straightforward: casual console gamers would select a regular monitor, while competitive gamers would go for a gaming monitor. However, the controversy has only intensified with the release of next-generation consoles from both PlayStation and Xbox that enable 120 frames per second gaming in breathtaking 4K quality.

Buying a gaming monitor is just as crucial as picking the finest gaming furniture, especially for gamers, because a poor decision might ruin your entire ultimate gaming setup.

Be sure to read the article and brief notes on everything! It’s vital for even experienced players to think about some of these things. You’ll discover that not every gamer requires a “gaming” monitor to get the most out of their experience. 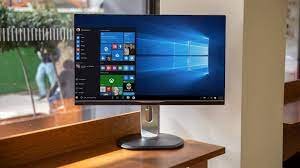 Gaming displays, unlike conventional monitors, feature a faster refresh rate and reaction time. For the same reasons, gaming displays will run games far more smoothly than regular panels. However, this does not imply that gaming displays are superior to regular monitors in every manner. This post will also discuss how standard displays are equally as excellent as gaming monitors.

There are a lot of similarities between regular monitors and gaming monitors, but the differences are found in the specifications. This section will look at some of the key specs that determine performance differences when comparing TVs versus monitors for gaming. We’ll also suggest alternatives for both so you can see how they compare in practice:

Gaming monitors will frequently have significantly higher refresh rates and visual density than modern televisions. They also feature a lower input latency and a larger selection of stand choices. Monitors used to have challenges with color reproduction and maximum screen resolution.

This is no longer the case, thanks to developments in panel technology during the last 3-5 years. 4K monitors with extremely realistic color reproduction are becoming increasingly popular, which is wonderful news for video makers and color-accurate productivity users.

Regular Monitors are frequently bigger, and color reproduction and viewing pleasure are prioritized over pixel density and speed. Thanks to display technology tailored to the typical living room setting, they also tend to be considerably better for seeing broad angles.

Gaming vs. ordinary displays has several key differences that help you choose the best one for the job. You can’t expect a standard office display to perform as well as a professional gaming monitor. There are a few notable distinctions between gaming and business monitors that you may not be aware of.

Examine the qualities that set gaming monitors apart. These are the most compelling arguments in favor of acquiring one. These are also the reasons why professional gamers would invest in specialized displays in order to remain competitive.

Standard displays have a slower reaction time and lower refresh rates than gaming monitors like the Pixio PXC327 game monitor. Pro gamers will enjoy the edge these screens give while playing competitive games like Call of Duty. The ability to respond promptly and precisely to an opponent’s plays might mean the difference between winning and losing a game.

In terms of visuals and color reproduction, gaming monitors make certain concessions. They make up for it faster and provide a smoother gaming experience (which is exactly what they were designed for). Regular screens, particularly TVs (which are also monitors), will have higher static image resolution, but they will not be able to operate a video game at 175 Hz without frame rate lag.

We don’t believe we need to go to great length about High Resolution. In the simplest terms, it refers to the maximum amount of pixels that your screen can display at any given time.

Of course, pushing your hardware is a good thing, but it’s worth noting that the higher the resolution of your screen, the more difficult it will be for your system to run games. As a result, you should seek a balance between a fast refresh rate and a high resolution.

In 2021, 1440p / 144 Hz will be the sweet spot since it will provide you with a gorgeous and sharp image at a resolution that won’t tax your GPU and squander your high refresh-rate display.

To be sure, 4K is fantastic, but you won’t be able to play many games at more than 100 frames per second on it, which is a huge letdown, in our opinion.

One of the differences between game monitors and ordinary displays is their size. Regular and ultra-wide gaming monitors are usually the same size unless the customer chooses differently. Despite the dimensions being the same, the pricing is usually different. It all comes down to the fact that gaming monitors are required to achieve a higher rendering quality than a conventional panel.

The majority of gaming monitors are between 27 and 32 inches in length. Most gamers will appreciate the appearance of their gaming sessions if they use these sizes in combination with 1440p resolution.

Furthermore, increasing resolution might put a lot of burden on graphics processors. That implies that getting high-quality parts for your gaming PC might be costly, and such costs may be prohibitive for most individuals.

There isn’t much of a difference in usage between a regular display and a gaming monitor. However, there is one point to consider. Good gaming displays, such as the PX275C Prime Productivity Gaming Monitor and the PX277 Prime Gaming  Monitor, can do almost everything an ordinary monitor can. They also improve memory and reaction time. As a result, you may utilize a gaming display for office tasks like programming and coding, but gaming on an office monitor is likely to be more difficult.

The design of a game monitor vs. a standard display is a distinguishing feature between the two types. On the other hand, gaming displays are frequently made beautiful, although office or regular monitors are not. This is because gamers are prone to preferring themes, specific colors, and RGB effects. Famous curved screen alternatives can also be found in gaming monitors, such as the PXC325 Curved Gaming Monitor, which combines aesthetic and practicality thanks to its curved screen.

The type of panel on a gaming monitor differs significantly from that on a standard business monitor. An IPS panel is used in gaming monitors since it is the finest for gaming. IPS panels provided a quicker reaction time and higher speed. On the other hand, work monitors contain TN or VA panels, which cause lag or a sluggish reaction rate while working.

The period between when your GPU generates an image and when it appears on screen is referred to as input lag. This is viewed as the few milliseconds gap between your input and its subsequent effect on the game being displayed when gaming. For example, the time it takes for your mouse to move and the pointer to move on the screen.

Input latency is a nuisance when playing a single-player game. It’s the thing that will get you fragged over and over again if you’re playing multiplayer.

Naturally, you want the least amount of input latency possible. You should aim for a time of around 2-4 milliseconds, which is just fast enough to be undetectable.

The refresh rate is about how many times an image may be updated in one second. It’s measured in Hertz (Hz), and you don’t want to be trapped with a 60 Hz screen if you have even a half-decent PC to run your games on.

It’s simple: the greater the refresh rate of your screen, the more frames-per-second it can display when gaming. Don’t get us wrong: playing games at 60 frames per second is excellent, but if your gear can handle 120 frames per second, continuing with a low refresh rate panel will simply limit your gaming experience.

As much as possible, you should aim for a high refresh rate. Modern gaming displays may go as high as 240 Hz, but if you’re looking for a more realistic aim, 120 and 144 Hz panels are also fantastic.

Choosing between a gaming display and a standard multimedia monitor doesn’t have to be tough. We understand that there is a lot of information on the internet, so we tried our best to distil the most important facts for you so you don’t have to waste any more time debating which option is best for you.